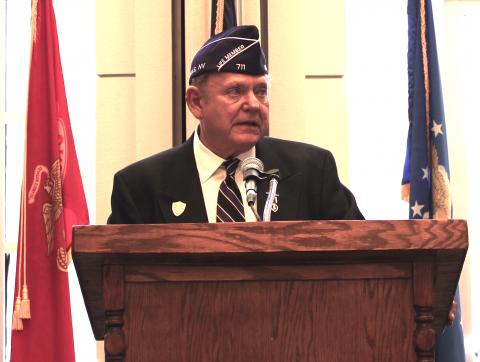 Chuck N. Baker is a Purple Heart recipient, award-winning journalist and an author.  He served in the Army as a Public Information Specialist at Fort  Riley, Kansas.  Then he was deployed to Southeast Asia with the Army's First Infantry Division where he was wounded by an enemy hand grenade and returned to the States to recover.

He has worked as a free-lance writer for several newspapers including the Las Vegas Review-Journal and the Boulder City News. He has been a television news anchor and is currently a radio broadcaster. He founded the Veterans Reporter newspaper and for 14 years was the editor and publisher. As an author he has written several books on real estate, popular music and British history. At this time he is completing a book on the history of the First Infantry Division in Vietnam. As a documentary filmmaker, he has produced DVD videos on veterans’ topics, and on real estate investing.  He is also a founding member and past two-term chairman of the Las Vegas Historic Preservation Commission, and a past commander of the California Disabled American Veterans.

In his presentation at Sun City Anthem, Baker will be speaking about the negative stereotype in the mainstream media that all veterans suffer from PTSD.  In order to help overcome that, he has written and produced a DVD documentary entitled “VETERANS: A Motion Picture.” The documentary he produced dispels the notion that all veterans have been so affected, or that those who are so affected can never recover. In his video production, he has interviewed numerous veterans who returned from the service and overcame potential harmful effects of post-military life. Baker will be showing excepts from the documentary as part of his presentation.